Last Saturday was the day that I had been impatiently waiting for since I ordered my two packages of bees two months ago. They had finally arrived. It was Bee Day 2013.

Mark, my friend -named, oddly enough- Bee and I drove out to Bayside to watch a demonstration of how to install the bees in the hives and pick up our two boxes of Italians and Russians. HBT (Hot beekeeping teacher) was the demonstrator, and that guy makes it all look so easy. He never wears protective clothing – only an old veil filled with holes that he puts on if people are watching. He deftly removed the queen cage from inside the package and placed her on one of the frames in the empty hives. Then he thumped the box on the ground, opened it up and poured the bees right into the empty hive. Maybe it was his confidence or his general ease around bees, but the girls did exactly what he wanted, which is probably just what I would do if I was a bee.

We grabbed our boxes and headed back to Eureka. I was confident that helping our girls into their new homes would go as smoothly as HBT’s did. This was my first mistake.

My second mistake was wearing flare-legged jeans while working with the bees. We had barely gotten started when I felt a tickle on my calf which I chose to ignore. I popped the feeder can out of the bee box, reached in while a few dozen bees flew out the top, grabbed the queen and put the can back in so that no more bees would escape. It was about this time that I felt a tickle on my inner thigh. And then another one on my thigh on the other leg. There was only one thing to do: Walk slowly and bow-legged into a corner of the yard and drop my jeans in full view of the neighbors while Bee makes sure all the infiltrators are out. No one told me that beekeeping was going to be so humiliating. 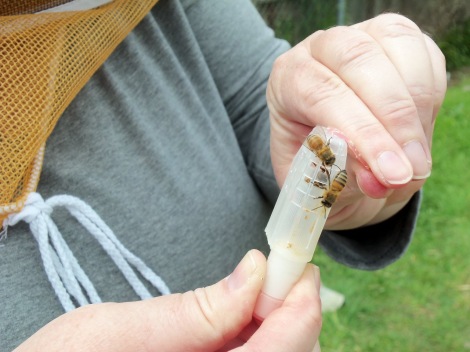 The queen in her queen cage. The bees will eat the candy on the bottom that will then allow her to be released from the cage as her pheromones are spread around the hive.

My third mistake was not buying a proper hat to wear under my veil. I just forgot, so I thought the next best thing would be to grab one of Mark’s ball caps and wear that. The veil wouldn’t stay over it. I turned the cap backward, but it still wouldn’t stay. I was anxious to get the bees into their hives, so I threw off the cap and placed the veil on top of my head – this meant about a third of my head was sticking out of the top. This was a very bad idea.

Bee and I thumped the box of Russian bees on the ground so that they would fall to the bottom. Bee lifted the feeder can out while I lifted the box and tried to pour the bees into the hive just like HBT did. Instead of falling into the hive like a nice, softly flowing waterfall, the Russians flew into the air surrounding me. They were dive-bombing my face and flying around my whole body like a tornado. Those little commie bastards were pissed, and it was obviously my fault. Within seconds I felt a sharp pain and then burning on my pinky. Then another one. Then I felt another sting right underneath my chin. How the hell did they get in my veil? This was followed by a deep awareness of why I should not have forgotten the hat.

Did you know that when bees sting, it sends out an alarm pheromone that tells all the other bees that the colony is in trouble, and they should attack as well? Suddenly I felt like I could very well end the day dead if I didn’t get away. I left the bee box upside down on top of the hive, walked a few yards, and threw off my veil and sweatshirt while Bee tried to get the bees out of my hair. When it was all over I had two stings on my finger, one on my neck, one on my arm and four on my head. Ouch. 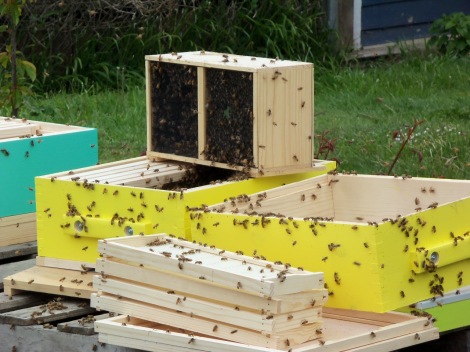 The package of Russian bees left on top of their hive.

After changing clothes and finding a cowgirl hat that worked underneath the veil, we were able to get the Italian bees installed without incident. We gave them both two quart jars of sugar syrup and put the lids on. 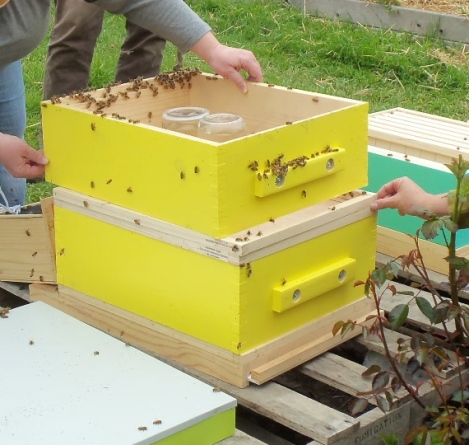 Sugar syrup will keep the bees full of energy while they’re establishing their colony and discovering where all the good pollen is.

We left the bees that were left in their packages pointed to the entrance to the hive and watched for hours as they gradually marched their way in. All in all, it was an exhilarating day, and although my face was swollen and my finger was so stiff I couldn’t even bend it, it didn’t stop me from celebrating with raspberry lambic followed by a benadryl chaser.