The days in Bahia were warm and slow.  Beach walks, beach talks, eating, drinking and lounging were what comprised most of our days and nights.  I thought I would write while lying by the sea, but most of the time was spent reading or daydreaming.

We went into town several times for groceries, dining out and a look at the fantastic museum.  It’s difficult to describe Bahia de los Angeles without sounding like a guidebook cliche’.   It’s a relaxed little fishing village.  The people are friendly and patient.  They don’t roll their eyes (or worse) like people do in the U.S. when someone struggles with the language or has trouble counting money.  There are a few very good restaurants where the fish is fresh and absolutely delicious.

One morning we hired a guide to take us on his panga to see whale sharks  and to tour the islands.  Bauricio drove us to a little cove where he stopped his motor.  The water was still with no waves at all.  It looked like we were floating atop undulating sheets of cobalt glass.  Suddenly a fin appeared out of the water, and as we looked closer, we could see the entire body of the shark gliding next to the boat.  This was a small whale shark at only about 20 feet.  The largest of the species are often 40 feet or longer.

We saw several more sharks in the cove and were thinking about jumping in to swim with them for a bit when Bauricio heard something on the radio.  “Did you hear that?” he asked us.  “The wind.  It’s coming.”   And within a few minutes the wind was there, and the sea began to get choppy.

It wouldn’t have been safe to travel to the islands, but as a consolation, Bauricio drove a little farther so that Mark could fish for a bit.  I was content to watch.  Mark caught several fish including a barracuda, a bonita and some very tasty yellowtail.  By then the wind had really come up and it wasn’t safe for Bauricio to take us back to where we were staying, so he took us back to his house – in a heart stopping journey over the very rough sea – where he cleaned the fish and then drove us back to our casita.

At Bauricio’s house, we met his wife and another woman who are local artisans.  They make beautiful jewelry out of shells, hand-embroidered purses from used clothing and purses woven from old snack food bags.

On Dia de los Muertos we made our way to the cemetery.  It was full of people cleaning, repairing and painting.  Whole families were there celebrating with food and brightly colored flowers.  Laughter rung out over the graves. 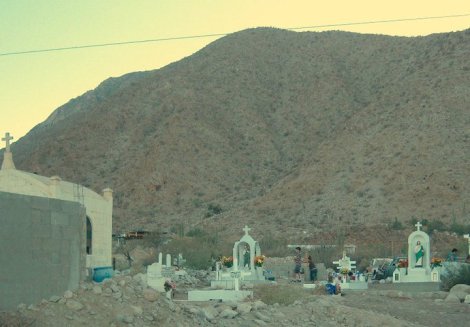 I was sad, on our last evening in Bahia, to have to leave the Sea of Cortez, although by that time my bedbug bites had become close to unbearable, and I was really looking forward to hot water.  We dined on Mark’s delicious lemony fish on the balcony before he asked me if I wanted to take a walk by the sea.  I didn’t.  It was almost dark, and I’d already gone for at least four walks, collecting Swollen Venus shells and taking photos of whale bones, earlier in the day.  But Mark seemed like he really wanted to, so I put on shoes, and we headed down to the shore.  We walked in silence for a long time, watching the night boats head across the sea to Coronado Island to fill their ice chests with calamari.

After awhile Mark stopped to kiss me.  We looked out at the sea together.  “You know, I love you so much, ” he said nervously.  “And I really hope you’ll marry me.”

There was a long, uncomfortable pause.  I wasn’t sure what to do with this hope for the future.

“Oh!  Most people phrase that in the form of a question.”

By this time we had both started to chuckle.

I threw my arms around him.  “A million times yes.”

Later that night, we lay in bed, neither one of us able to sleep.  Mark hit his head with his hand. “God….I couldn’t even ask you to marry me the right way.”

Guess I’ve got the rest of my life to show him that it’s his imperfection that makes him so perfect for me.

12 responses to “Meanderings and Ramblings Part 5”